ONBOARD A US COAST GUARD ICEBREAKER OUT OF ST. IGNACE, MICHIGAN

By William VanDerKloot on Tuesday, May 12th, 2015 in Camera Technology, Georgia Film Production, On Location. No Comments 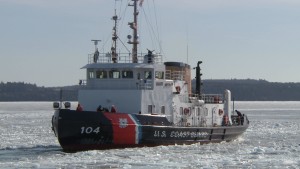 The following are some observations from a shoot for the upcoming Little Mammoth Media® production, The BIG Freeze.

It was 9 degrees and still dark when I pulled up on the US Coast Guard dock in St. Ignace, MI. Our icebreaker, USCGC Biscayne Bay was quiet, as the crew arrived and parked their cars. Soon a giant fuel truck would come to pump hundreds of gallons of diesel fuel into ship to feed its two diesel engines. These engines don’t drive the ship, but they power a generator that creates electricity, which powers a large electric motor.   It’s the electric motor that drives the ship.

The ship’s youthful captain, Lieutenant Commander Tom Pryzbyla and Executive Officer Lieutenant Ty Bateman welcomed me and showed me around the ship. Like all working ships, space was at a premium, and every corner was utilized. There were lots of small hatches and walkways connecting the various parts of the ship.

As the sun was coming up over the solid ice in the harbor, the captain held a navigation briefing on the bridge. He led a discussion of the mission for the day, and the crew discussed various navigational and weather issues. Soon we pulled away from the dock and entered the shipping channel. The entire portion of the lake was completely frozen. The channel was evident only by the long trail of broken ice that had re-frozen overnight. 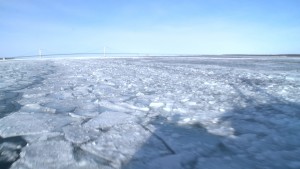 As the Biscayne Bay moved through the channel, it broke and parted the ice with a loud banging sound, combined with a crunching sound of ice being squeezed and broken. The captain explained to me that the ship actually rides up on top of the ice and its weight crushes it. As the ice is broken the bow wake of the ship pushes it away, leaving a wide path of clear water and broken pieces of ice behind it.

An icebreaker is a special kind of ship. The Biscayne Bay is 140 feet long and carries a crew of 19. From a distance it looks like a regular ship, perhaps a seagoing tug. But it’s what’s beneath the surface that makes a difference.

The captain explained, “An ice breaker is built stronger than a regular ship, so it can handle the impact with the ice. So the steel is thicker, in addition to that, it has more power than most ships so that it can get through the ice.” He continued, “The ice that we break is about up to three feet thick. Sometimes it gets piled higher, the wind will move ice plates around, and it will begin to stack ice on top of itself. Those piles can be as high as ten feet.”

To show how thick that ice was, the captain had the ship ram into the large plates of ice. As we hit the ice plates, the ship began to slow down until it came to a stop. The ice was too thick to break. Luckily, the ship is equipped with a special compressed air system, which shoots bubbles around its hull. This keeps ice from attaching to the ship and allows it to escape from being trapped in the ice.

We were soon back underway. As we passed under the beautiful Mackinac Bridge, I noticed we were the only ship out on the lake. It was truly a sight to behold – a giant green metal arc over a white ice-covered lake. This year over 88%, of the surface area of the Great Lakes were covered by ice, one of the frostiest years on record. This kept Coast Guard ice breakers busy. 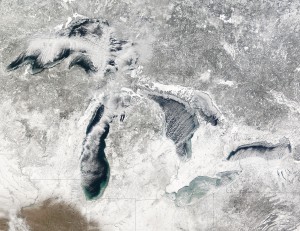 Millions of tons of cargo are shipped across the Great Lakes every day. Giant lake freighters carry bulk cargo like coal, iron ore, grain and cement to keep whole industries operating. If freighters get stuck in the ice, commerce comes to a halt. That’s where ice breakers come in. The US and Canadian Coast Guards keep icebreakers on call to rescue ships caught in the ice. They break the ships free and then create a channel for the freighters to reach port. It’s a very important job, and it’s done in extremely cold weather.

The captain told me that many winter days are well below zero, and with the wind chill it feels even colder. This day happened to be sunny and bright, but still bitter cold, especially with the wind off the lake. 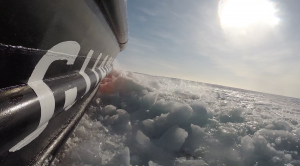 We filmed in all parts of the ship – from the rudder in the stern, to the engine room, stateroom and the bridge. We even filmed the cook in the kitchen as he made lunch. The best vantage point for seeing the ship at work was from the front upper deck of the ship called the forecastle or fo’c’s’le. From there we saw the ice being broken and pushed away from the bow. We used a small GoPro camera to capture the ice being broken right at the water line. The day was so cold that when water splashed up on our cameras, it immediately froze, so we had to warm the cameras inside to melt the ice in order to wipe them dry.

It was an exciting day. As the crew dropped me back at the dock, they had to immediately rush off to aid two freighters caught in the ice near Salt Ste Marie. We drove to the base of the Mackinac Bridge and filmed the Biscayne Bay as she moved through the channel of ice.

This filming was for the Little Mammoth Media® production, The BIG Freeze, which looks at all things frozen – from snow to ice to ice cream. This children’s video will be released in late 2015. For more information, go to www.littlemammoth.com